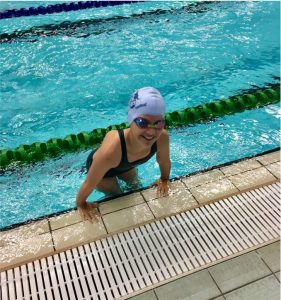 On the 25th of July 2018 I was on a plane flying to Tasmania as I had made it to the School Sports Australian Championships for multi class swimming. The competition was held at the Hobart Aquatic Centre. My family and I arrived at the swim centre and I met other competitors from NSW. I was competing in various events over the next 6 days.

The next day I was in my swimmers ready to to do my first event which was 200 metre freestyle, I was on the block, ready to go. I heard the buzzer then dived into the pool. I felt the warm cool water tickle my toes. I was kicking my feet as hard as I possibly could and spinning my arms which made me speed like a bullet gliding through the water. I was completing my final lap, I was exhausted as I touched the wall, but excited as I had come 4th!

My next race was 100 metre breaststroke,it was in the evening and my last event for that day. It also is my favourite stroke. I ended up coming 7th.

On the second day in Hobart I competed in one race, the 50 metre butterfly. Butterfly is my least favourite stroke. I finished the race in 7th place. That was my only race of the day.

I went back the next day and only had one race, the 100 metre freestyle. In this race I came 6th.

The next day I had two events. My first event was my 50 metre breaststroke, I ended up coming 8th. My next race was the 200 metre medley relay.  I was very excited because I was competing in a team event with other people. I was swimming second in the relay. As my teammate touched the wall I dived into the water to complete the breaststroke leg of the relay. I touched the wall and the person in my team doing butterfly dived in, then the person doing freestyle finished. We waited and waited for the medal ceremony and for the officials to make adjustments as they have to calculate results by comparing times to the world record of each stroke. We then discovered that we came 2nd! My team and I were so excited, I couldn’t believe I had actually won a National medal.

The last day I had two races. My first race was pretty exciting because I didn’t even race for NSW! I competed for Northern Territory relay, but it wasn’t any old relay, it was a handicap relay. A handicap relay is when you have ten people on your team and depending on your teammates time for the previous events the officials calculate all the times and do an average number of what your team goes on. My team went on 6 seconds but some teams went on much higher numbers and lower numbers. It was a mix-stroke relay. I did breaststroke and my team came 6th. Then I did my last event of Nationals. I didn’t compete in my normal age group 10-12s, I competed for the 13-15s. I was much smaller than them. I swam 2nd and we came 4th.

So that was the end of my time at Hobart. I really enjoyed it. It was a great experience for me!