Board of Good Will Goes Bush

During Term 3 of 2018 Holy Cross Catholic School held a number of fund raising events to raise money and goods to support a Catholic Community in regional NSW in a drought affected area. 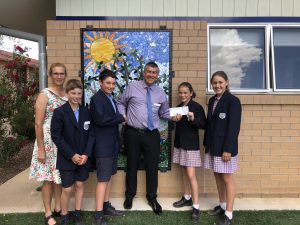 Money was raised through a sausage sizzle, pancake morning tea, teachers cake stall, “go without an item” week and a family BBQ and games evening.  Over the term we raised $2703.95 in funds and we also collected new clothing during one week of the campaign in a variety of adult and child sizes.

In consultation with the Catholic Diocese of Armidale we made contact with the community of St Michael’s Catholic School in Manilla, about forty minutes north-west of Tamworth.  This week I had the absolute pleasure of delivering the funds and clothing to the school and had an opportunity to speak with the students about how the drought has affected their families. 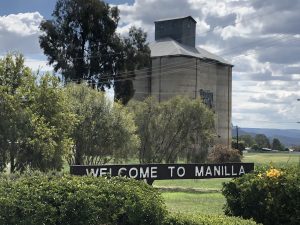 I spoke to one student who has just moved off the land and into town.  Her family has had to sell a farm that has been in their family for generations as it is not viable in these drought conditions.  I also spoke to another student whose family owns a dairy farm and heard that they may have to also sell if drought breaking rains do not come soon.  Her family is hand feeding the cattle cotton seed which cost $200 per tonne a year ago but now cost them $800 per tonne.  Another student told me how she had to help her grandfather on the weekend after the cattle went to drink in the dam after the recent rain fall but two of them got stuck in the mud and died.  These stories were not isolated to these few students which demonstrates the affect that this drought is having on our rural communities.

On the drive north I noticed that the land was deceivingly green after the recent rainfalls in this area but was told that most of this ground cover will burn off by the end of this week as they are expecting hot days over the next week and there is no rain predicted in the near future. The other thing that struck me as I drove through the region was that in the past I have passed field filled with sheep and cattle but this time the same fields were either devoid of stock or there were very small numbers of stock.  Many farm dams were empty or had little water left in them and it is cruel to see that the rainfall supplied some relief to some farms whilst other farms nearby totally missed the rainfall. 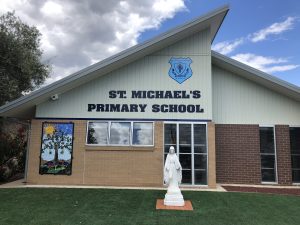 Mrs Karen Keys, the Principal of St Michael’s Catholic School, was very grateful for the care provided by our school community and assured me that it will make a big difference to the families in her School and Parish.  She has asked me to pass on their gratitude to all members of the Holy Cross Catholic School Community for our efforts and concern.