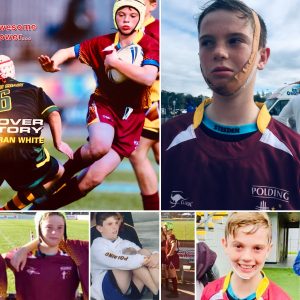 Congratulations to Kieran W in Year 6 who has been selected as a member of the NSW Primary Schools Sports Association (PSSA) Rugby League State Development Squad. Last Friday Kieran participated in the NSW PSSA Rugby League Carnival at St Mary’s Rugby League’s Club. Kieran played as part of the Polding (all Catholic Schools in the northern half of NSW) Rugby League Team as the number 13 (lock) for the team.
The Polding Team came first out of their pool and fourth overall in the NSW PSSA Rugby League Championships. Kieran played with dedication and put his body on the line for the team, even playing on with stitches in his chin from an injury suffered in the pool games.
Kieran was awarded best forward for Polding and was selected to join the NSW Primary Schools Team. They will now go in to camp in Sydney in the first week of the holidays.
Holy Cross Catholic School is very proud of Kieran and wishes him every success as his adventure continues.